A night out in Hong Kong

Greg:  I have a meeting near the Ritz Carlton in Kowloon, you want to come with me, go have a drink at the bar, I think it’s the highest bar in the world or something and I’ll join you after my meeting.
Me: YES!!! YES!!!

I put on my prettiest dress and my only non flip-flop shoes.  We taxied over to the Ritz on Kowloon Island where a valet opened our taxi door and welcomed us to the hotel.  A lovely attendant then walked us to the elevator and indicated the reception floor to us on the 60 something floor.  We shared the elevator with what seemed to be hotel guests. There I discreetly starred at them thinking, wow really they can afford this 600$ per night hotel?? There’s just something about people with lots of money, somehow something oozes from them, even if they were wearing sweat pants and running shoes, something about them just said they belonged here a lot more than we did.
Anyhow, we got to the lobby and then into the second elevator from the hotel lobby to the bar on the 107th floor, this passage between elevator 1 and elevator 2 is necessary so that the friendly but thorough hotel staff can judge if we are worthy enough to enter the world’s highest bar in one of the world’s most luxurious hotels.  No sandals (at least for the men), check, no sweat pants, check and a general up and down check…. Since Greg and I are such attractive people we obviously got in no problem.

Ok so Greg went to his business meeting as I started exploring the bar, strolling about, seemingly unfazed by the Louis Vuittons that brushed up against my shoulders and Jimmy Choos that stepped on my feet.  The bar obviously has an incredible view of Hong Kong Island and its harbour, the crowd ranges from posh business types to Hello Kitty teens trying to act much older and more important that even they believe they are.

First thing first, I need a seat with a view, firstly because I’m in the world’s highest bar and secondly I’m alone so I need something to look at for the next 1 to 2 hours.  All the seats are taken and I’m not the only vulture loaming about, 5 minutes go by, 10 minutes go by, I’m about to give up and   go sit at the bar when I notice movement in the corner of my right eye, no one else seems to have spotted the moving pray, I approach and with a friendly nod my seat is confirmed, 10 more minutes would get me the drinks menu. No surprise there, the cheapest drink costs about 30$, my daily budget when we were travelling in Bali, but hey when in Rome.

Wonderful, I get a beautiful concoction of Gin, tonic with cucumber and rosemary and ice on the side ensuring that my drink will, at least in appearance, last a little longer.  So now what?
I haven’t been to a bar on my own like this for a while, what was the etiquette nowadays?  I tried not to make eye contact since I really didn’t want it to seem like I wanted company…
I turned and looked around hoping Greg would soon make an appearance, nothing, when I noticed a very cute Indian guy staring in my direction and quickly turned away as I looked directly at him.  It made me smile, I turned one or 2 more times.  He finally seemed to have the courage to walk towards me.  Ok he’ll say hi, why not?  It's been a while since I've properly flirted. He then took out his phone and snapped a picture of the view and left.  Right, the view…. It’s not all about me, why isn't it about me?  10 years ago it would have been about me...... but right now I'm old!

I stared out onto Hong Kong again when suddenly I felt someone sitting next to me.

Him: Excuse-me are you waiting for someone?

Me: Um yes I’m waiting for a friend who is stuck in a business meeting.

Him: Can I sit with you until he comes.

Me: Yes of course.

Him: I’m Jeroen by the way.

Me: Hi, I’m Andreea, are you Belgian by any chance?

He was Dutch and on a study exchange here, I asked if it was for this Ph D, the said it was for his second year in University. Second towards his Ph D right?  No no second second, I quickly did the math, and indeed it was quick since there weren’t too many numbers to add, he was 21.  21!!! But he was cute so why not chit chat.

I had forgotten how incredibly uncomfortable it is to flirt or try to pick up at that age, he asked me what my favourite band was, my favourite movie, favourite actor.... it was like being on a quiz show. His favourite Artist was Biggie Smalls.....He was like 1 year old when Biggie was killed and I was finishing highschool.

Him: What’s the craziest thing you’ve ever done?  Have you been here before?  Do you like sushi?

All the while trying to somehow lean further and further into me in a very odd (but cute) attempt to kiss my neck, that or he was a vampire trying to bite me. 45 minutes later, still no sign or Greg and
I had had just about as much out chit chat about Biggie, Tupak and Snoop Dog's poetic skills as I could have for one night, when suddenly he looked at me and said, ‘Come home with me’.

It was a cute attempt and I didn’t want to discourage him completely from trying to meet girls in bars in the future, so I thanked him for the offer but that I had recently broken up with my boyfriend and just wasn’t ready for that right now.

Him: Ok, I have to go then because I’m getting tired (yes at 21, 2 AM is past your bedtime I thought), but it was nice meeting you and you’re very pretty.

It was cute and it did make me smile but man was it awkward, I feel sorry for guys sometimes, it’s not easy to pick up a girl, there isn’t much you can say that won’t be a cliché, all the original stuff was taken by Tom Cruise in Cocktail.

Ten minutes go by, I get a message from Greg, I’m there in 20, the meeting ran late. Alright, I added ice to my drink to make it look fuller because sadly I couldn't afford another one tonight, or else I’d have to forgo eating for the next 2 days, not that forgoing food for another Gin and Tonic was beyond me …..

I stared out again and for a moment I had forgotten for a second that I was suppose to make myself feel bad about all 'that stuff', old, single, messed up, why would I not beat myself while I was down?  I was so good at it.  Just as I was about to go back into that ‘what am I doing with my life place in my mind’ the cute Indian from earlier came to say hi.

We exchanged pleasantries, how hot it is in Hong Kong, what a crazy view we have, how expensive the drinks are....., he was from London and taking a break from Uni to travel.   He was also not taking a break from his Ph D and was also 21, their combined age was closer to mine than their actual age, how sad is that?

It’s a strange feeling, up until not so long ago I was almost always the youngest or one of the youngest among the people I hung out with and now I’m having drinks with people who are barely old enough to drink. When did that happen?

Regardless, he was also very sweet and had a nice smile  (and I love the English with subtle Indian accent reminds me of when I read 'The Rains Came').
And then just as we started talking about the new season of Game of Thrones and how my hair looked like Cersei's hair, my favourite character  on the show (and yes I'll admit with her twin brother as well), a very tired looking Greg walked in.


I said goodbye to my new friend and like most nights, went home with my beautiful gay husband! 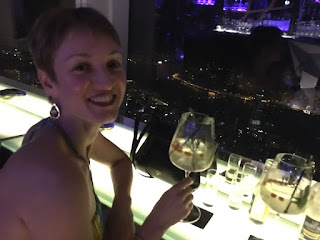