After 6 days of the cross-country skiing thing, after 6 days of marvelling at the northern beauties, 6 days of northern lights every night……6 days of no shower or let’s say bio-degradable wet-ones shower, we were back to where we had started Pallastunturi hotel. A “luxury” hotel next to the ski slopes and in the middle of the Pallas-Yllästunturi national park. The original hotel was built in 1938 and then destroyed after the Lapland war by the Germans and re-built again in 1948. When they first built the hotel there were no roads going through the park and they and to bring all build material by horse during the summer or reindeer in winter (though construction didn’t go on too much during the winter). It served as a luxury get-away for city folk who wanted to ski and enjoy Lapland’s scenery. (it kinda looked like the hotel in The Shining….)

Anyhow, this hotel was like a little piece of heaven with a sauna and shower, don’t get me wrong I’ll take cross-country skiing in the wilderness over a hotel stay any day but the 4hours sauna-shower combo and reindeer stew with a bottle of red wine was very nice.

There were old pictures throughout the entire hotel showing how people use to dress/smoke and hang out next to the fire place, women in skirts and nylons, men in blazers and children playing with wooden trains. One night at dinner we also saw a video dating back to the 40’s showing men skiing and going up the hill on foot….. we really had to earn it back then! 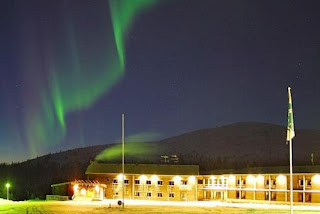 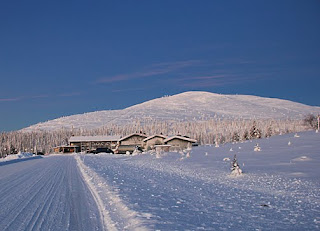 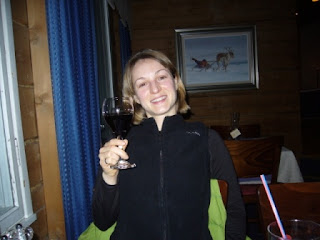