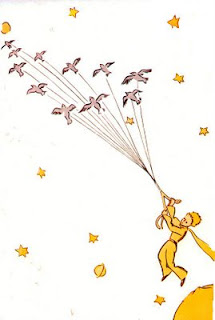 I'm not sure when I read the Petit Prince for the first time but I do know that every time I pick it up again I realize something new about it. It's a good reminder that life doesn't have to be so complicated and I think it's something we all need to be reminded of.

I often wonder how different my life is today than a year ago. Meggi (from Germany/Madagascar) was here last week and it's crazy to be sharing an apartment in the posh part of Brussels after living in a lost little corner of the world where the 2 of us were the biggest novelty in the city. Life really was simple then but somehow I did find ways to make it complicated.

Is it being an adult that makes us suddenly take everything so seriously? Do we have to make it all so important? I sometimes catch myself in the middle of forming some absurd scenario about work, or when i was in Mad about teaching, or planning bachelorette parties from the other side of the world. Then I stop and wonder why? Haven't I realized what the essentials are? I thought I had or at least I had a better idea but then life sucks you back in or maybe we just let ourselves?

This is silly but remember in the Matrix (the first one) when the guy (don't know his name but the robot guy) says the first version of the matrix was perfect, a Nirvana for all, and people couldn't handle it? I think there's some truth to that, some truth to the fact that maybe people seem to find comfort in certain degrees of unhappiness. Certain degrees of making things complicated. Why is it people like to gossip and complaining as a group is so much funner than just saying everything is great! I think this is why it's so nice to be around children, they question their status much less than we do and just find ways to be happy by just being and living the moment.

For those who haven't read it please pick up the Little Prince and find your inner child :)