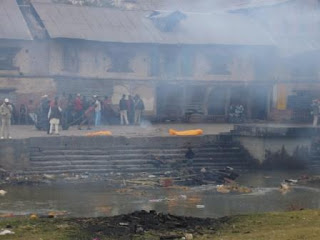 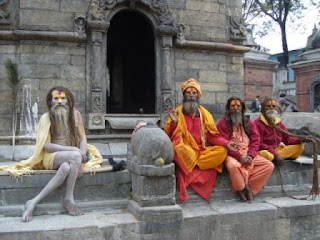 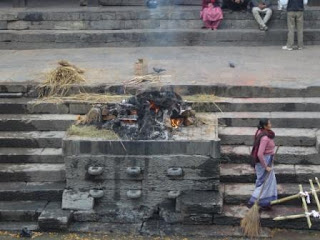 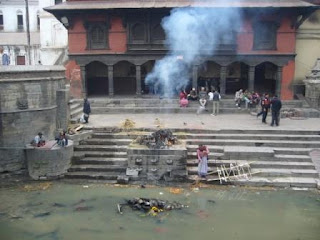 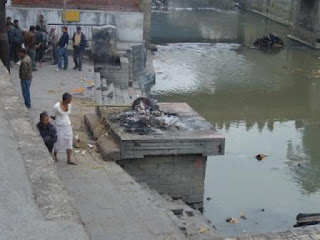 In general I think no matter which religion, if any, you belong to or where you come from, we all at some point think about death and ask ourselves alot of questions. I sometimes wonder if religion itself was created to maybe answer some of those questions or even to just chase the fear of the unknown.

It's always interesting to see how different cultures regard death. In Madagascar, in some tribes, notably the Merina, you don't even ask where a person is born but where they will be buried. Back home death seems to be just about the worst thing that can happen to you....and inevitably it will happen to all of us. Here the hindu part of Nepal which accounts for about 75% of people, their belief in reincarnation is so strong that death is just seen as another step in the cycle of life.

This is Pashupatinath (something like that) where the cremations of Kathmandu take place. It's difficult to describe what the mood is like here, especially to a westerner, we like graves and tombstones where we can go place flowers and pretend it means something to our deceased loved ones. Here the body is burnt and the ashes thrown into the Bagmati holy river. The river is "cleaned" in this section for rituals and so people can bathe in the water as is tradition after the cremation of a loved one.

Women do not assist to cremations except a certain tribe called the Newars. In the old days, if the husband died before his wife, she would throw herself in the flames of her husband's burning body to die with him as a sign of grief. If a husband lost his wife, he would find another one probably during the cremation ....it's quite the patriarchal society here.

Anyhow, it's a strange feeling, cremations are almost done conveyor style, the men shave their heads as a sign of mourning and the body is burnt, the ashes thrown out, people "cleanse" themselves in the river and then we move onto the next one.

Around the temple, the Sadhus walk around going about their business. In Hinduism, the sadhu is a wandering monk. The sadhu is solely dedicated to achieving the fourth and final Hindu goal of life, moksha (liberation), through meditation and contemplation of Brahman. They wear colorful clothes, cover themselves in ashes and survive solely on what they make from begging as it is a Hindu's duty to provide for them.

It's an incredible place, a place where life, death, spirituality....I wouldnt' say come together for me because I'm not that smart or enlightened but it's something. It makes you wonder about life and death and how closely related they are.