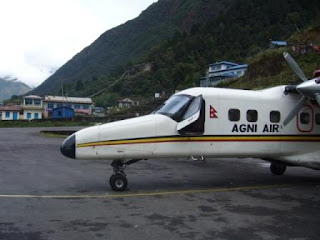 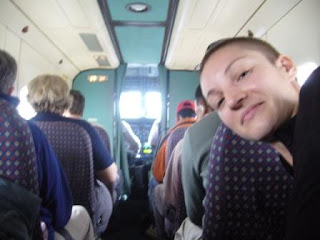 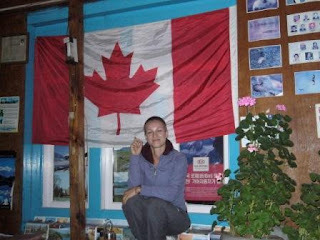 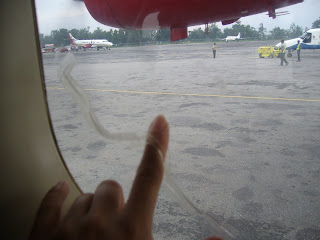 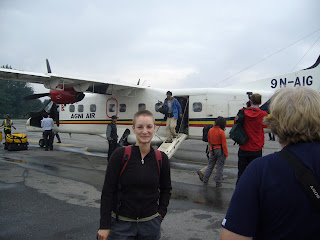 I think no better word can sum up the experience on Everest that I just had. Every day was so incredible that I think I was looking down on cloud 9 from cloud 999999.
So I’m going to start to tell the story as best as I can, I might go day by day I might end up just rambling….but here I go.

Day One
Flight to Lukla which is basically the starting point for all treks. I think you can tell a lot of a country’s character by it’s airport and this airport is a mess but the people as so nice and somehow things still get done.

So after a 2 hour delay we’re driven to our prop plane which has a broken window staying together with scotch tape…..not even duck tape!!!! Flights to Lukla are very volatile to the weather and are often late and cancelled although they say fairly safe…...

We walked for about 3 hours that day to Phakding, it rained a little which is very unusual for this time of year. Our tea house in Phakding was cute, small but it had a huge Canadian flag so it’s all good. We saw a bunch of rivers on the way, beautiful for kayaking, I know a few people who would go crazy here!

Me: Okay so where is the shower?

Wangdi: No shower today little girl, we shower maybe once every 3-4days on the trek.

Me: Pardon? No I don’t think you understand.

So as you may or may not recall in a much earlier Blog I said that nothing stands in the way of me and my shower…..well it would appear that I was wrong. Everest stands in the way! Stupid mountain and stupid people wanting to climb it…..and not even climb it but go to Base Camp which is like half way….what’s the point! So how does one survive say you? Wipes say I, I had about 10kgs worth of wipes for every separate body part :)