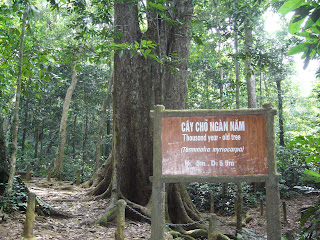 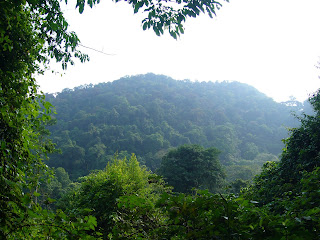 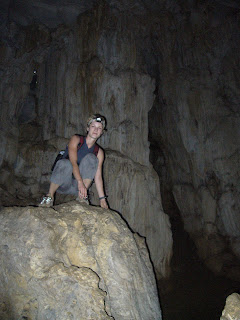 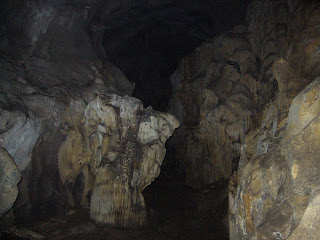 Okay so after biking yesterday, I decided to rent a motorbike today to get to the national park 45kms away from here. So in Nosy Be in Mad the scooter thing.... Well Meggi knows, I kinda nearly killed us....twice....but I swear by the end I got better. Today, however, I don't know what happened but I was a pro at it, it just came so natural, I wasn't nervous at all, had total control. That until I got to traffic, and I wasn't going crazy passing people left and right but there is a lot going on, on the roads here.

A few minutes into it though and I got the hang of it passing people on the left the right, and before I knew it I was doing 70km/hr, it's not crazy but in Mad I was afraid to go anywhere above 45.

Getting to the park was fairly easy, just a little longer than I had planned. Anyhow, I started a 2 hour trek where you get to see some cave and some 1000 year old tree. Water check, good check, flashlight, first aid kit.. check check. Okay I'm off. It's hot humid....your usual tropical forest. When I got to the caves I ran into some people from my hotel, a couple. She's American, he's Italian and they both live in Spain.

"You have a flashlight by any chance I think we can go pretty far in the cave."

As a matter of fact, yes I had a flashlight and yes you could go really far into the cave. It was beautiful I can't believe it's not a tour on it's own. We went in pretty far and the cave just kept going....but We felt it wasn't prudent of us to keep venturing....

ANyhow, we walked and then split up and I went my own way....and I got lost. Now you have to understand the trail was paved....yes paved but I kept walking and then no paved trail just a regular trail. On the map technically it should have met up with another paved trail but I kept going and the trail started looking like less and less of a trail and it was getting dark. I saw a guest house in the park at some point so I figured I'll just go back to the paved trail.... for about 15 mins I thought I was lost in the middle of the forest.....

Before I left someone asked me are you ever scared? I said scared of what?
Anything? Big rats? YES!!! Terrified but otherwise no not usually, well at this moment I was scared of having to spend the night alone in the forest and ending up on Discovery channel. Should have start saving my pee for water? Do I make a shelter? And then just when I was letting my mind run away the paved trail!

Instead of going to the guesthouse I decided to just back track to where I started 2hrs before....it was 4-ish, the sun sets at 6-ish.....stupid tree and stupid caves, it started raining a little....but just a little.

Then at 6 I got back to the motorbike and I noticed I had less gas than what I thought....it's ok just a few kms and I"m out of the park. The only problem was that it isn't very well lit in this area but I kept going and sure enough I got to a gas station and the people there were nice enough to help me open the bike seat that was stuck and tell me how to get home. Once all was well I started enjoying the motorbike, I can see how people travel on these...of course yesterday I was ready to do all asia by bike and today by motorbike....they both have their charm.

I thought of 3 no 4 people alot today: my mom because she worries about me on a bike so a motorbike..... 2) Liz because she said whenever you think would Liz not do this? then don't. well she would have stayed at the guest house 3) Seb wouldn't be proud that I got lost in the forest with paved trails.... and last Anne Marie because she worries Mia might turn out to be too adventurous.

Today I was worried but I am always careful and so far so good, I will be more careful from now on when going on a hike alone.