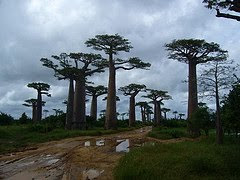 Morondava is on the west coast of Madagascar about 300Kms from Betafo, 300kms or 19 hours of taxi-Brousse. Yes after 19 hours of being 5 people seated in a row for 3 one thinks that one's butt and the seat have become one. In fact it took about " days for my butt to find it's bubble like quality. So 19 of TB, near death experiences: 3, weird things creeping up my legs: 19, weird people trying to lay their head on my shoulder: 12 and deadly cuts caused by other passenger's toe nails: 15.

Morondava is a small, touristy but still has a great deal of local charm town. There was an important Indonesian immigration a few years back so the city houses 2 mosques. In general here people are much more "westernized" than in our little Betafo. People speak French, have children out of wedlock....and Such.

So I will not go into full detail about our trip because I'll be here for the next 20 hours but here it is in point form:

-the sea food was amazing

-we found a nice little bar (Chez Fab) where we played pool, ping pong and had wonderful rum with fruit juices and of course made friends with the locals

-we spend 2 days in Kirindy national parc where we went for a night and day walk, we saw lemurs, snakes, all kinds of reptiles and the forest itself was beautiful

-beach..... The Indian ocean or Mozambique channel is just as amazing as I remembered it

So that's about it in a nutshell, it was absolutely amazing

PS: Dumi, I caught a lemur for you, he sang everything but "I like to move it move it" he said the movie offended his kind so I had to let him go.....