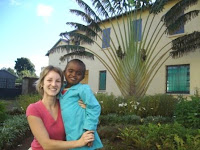 Justin is 9 years old, 3 years ago his mother brought him to the Salesians here in Betafo. At that point he couldn't walk, he hardly spoke and was seriously malnourished. His body was underdeveloped and all that really stood out was his large head. The sisters said some of the other children were scared of him initially.

First thing, they brought him to see the doctor who said his chances of survival were very slim. Nonetheless, the sisters took him in and he lived in the main house for about 6 months. They started him on a slow diet of water and sugar, then rice, then fruit and so on until he reached a more "normal" weight. Yet still he couldn't walk, so they placed him with the interns who live here. These girls are about 15 to 22 years-old.

Soon he became like their little brother and everyone was crazy about him. Surely enough a few months later he started walking! What was missing all this time was love and affection. This is something the sisters here try to teach the parents that even if they are poor and have many children they need to show love in order for them to have a chance at developing properly.

Justin still has trouble walking because his leg muscles are not strong enough yet, so I have asked if I could have sometime with him every day to do a little exercise. Every morning now, right after his breakfast, we play together for about 40mins.

He is very shy around me and it will take some time before we see some progress but still it's great to have the opportunity to help him even a little if I can.